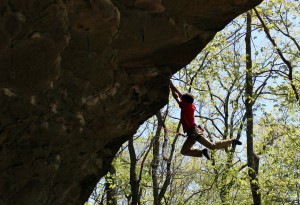 William dangles from a cliff during a challenging climb.
Photo: William Pair

Junior William Pair is known around the Pace community for his skill in an adventurous and often risky sport: rock climbing. He has been rock climbing since the age of eight. His love for rock climbing began when his family went to one of his older sister’s rock climbing competitions. He grew bored, and since he did not have anything else to do, he decided to compete and ended up getting third place. Since then he has won countless competitions and has been to Nationals nine times.

William’s parents own Stone Summit, the rock climbing facility where he practices, so he has grown up in a rock climbing community and can climb whenever he wants. He practices three or four times a week for three hours at a time. William says he loves rock climbing because of “the challenge and hard work,” but his favorite thing about climbing is the people he meets, specifically his girlfriend. When asked what his least favorite thing about climbing is, he replied, “It’s a huge time commitment, so it’s hard to balance school and climbing. Most competitions take full weekends too, and I have to travel all over the country.” The farthest he’s ever travelled for a competition is California.

There are three main types of climbing: bouldering, speed climbing and sport climbing. Bouldering is rock climbing without ropes or harnesses. His favorite type is bouldering because he “doesn’t have to worry about ropes or anything, he can just climb.” Even though he is a veteran at competitions, William still gets nervous before each one. He listens to music to calm his nerves, but the anticipation and adrenaline also help him focus. William works as a route setter at Stone Summit and hopes to continue climbing well into the future.