Who Will Wear the SEC Crown? 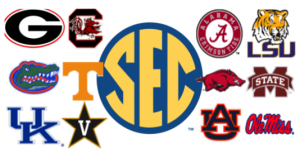 Saturdays in the fall bring a sense of excitement to all avid southern football fans as they look towards a new season in the Southeastern Conference (SEC). The SEC has by far some of the toughest football teams in the Bowl Championship Series (BCS). Many fans would consider the SEC Championship a more coveted victory than the BCS National Championship. This is because of the great rivalries, and the high intensity of Southeastern Conference play. The Alabama Crimson Tide have been the powerhouse of the SEC, winning the national championship three times in the past four years. For Alabama fans, they believe winning another national title won’t be any harder than it has been the past two years.

However, being the toughest conference in the country, there are many other teams in the SEC that have a fair shot at the title, including the Georgia Bulldogs, the Louisiana State University (LSU) Tigers, the South Carolina Gamecocks and the Florida Gators. Last year, the Georgia Bulldogs were four yards away from winning the SEC title against the Crimson Tide and playing Notre Dame in the national title game. Could there possibly be a rematch between the two teams in the SEC championship again? This would depend on how the ‘Dawgs play in the first month of the season when they play three top- ten teams in four weeks, two of which are conference games.

Unfortunately for Gamecock fans, losing to the Bulldogs earlier this year may have dashed their hopes of making it to Atlanta and leaves Georgia controlling their destiny in the Eastern Division. In the Western Division, The highly favored Crimson Tide are very capable of having a perfect season, as we have seen in the past, as long as they can pull off a victory against the LSU Tigers. LSU will travel to Tuscaloosa on Nov. 11 to face off against the Crimson Tide for one of the most anticipated games of the year and one that will likely decide who represents the Western Division in Atlanta. Alabama and LSU are undefeated at press time.

College football is one of the most competitive sports watched and followed. The SEC holds some of the best teams in the nation, which they have proved after winning the last seven national championship games. This year the teams of the SEC are very competitive and will face their toughest tests against each other. Will Alabama continue their dominance? Or, will a different team rise to the occasion and make their way to the forefront of the Southeastern Conference?