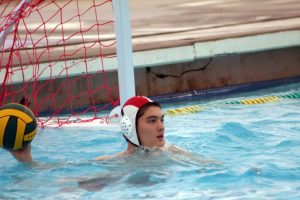 Senior Philip Werner defends the goal for the Knights. Werner was on the GHSWPA preseason watch list.
Photo: Phillip Werner

Football, basketball, water polo, one-act play. Which of these is not a GHSA sport or activity? That’s right, water polo. This sport, which resembles a mixture of swimming, handball and rugby, is not a GHSA-sanctioned sport. Instead, it is part of GHSWPA, the Georgia High School Water Polo Association, a club league started in 2006. It is currently comprised of 18 teams, including Pace.

While Water Polo Coach John Ague enjoys the current league, he said that there is an “imbalance,” since some teams are county/district teams while the makeup of other teams, like the Pace team, are students from only one school. Joining the GHSA might flatten this imbalance, but a union of the GHSWPA and the GHSA seems unlikely in the near future. Coach Ague said, “I think everybody in the league is in favor of it. The GHSA has represented the notion since the league started eight years ago and has given us some guidelines to possibly get that accomplished. The problem is, some of these schools don’t have the resources financially to start adding programs, since a lot of them are cutting back, so it’s kind of an uphill battle because of that. They have given us guidelines that say we need ‘X’ percentage of schools across the state before they consider it as a varsity sport.”

In an email, GHSA Executive Director Ralph Swearngin explained the process: “High school sports begin from the local school level and then can possibly grow to become a state championship sport… When there are schools across the state (a minimum of 32) participating in a sport, those school(s) may petition the GHSA to allow the sport to have an ‘invitational championship.’ After several years of growth (numerically and financially), the schools participating in that sport may petition the GHSA to have the sport considered a ‘state championship’ sport.”

Even though water polo is on its way to making this happen, Swearngin said the main reason why it is not possible right now is because “school administrators are reluctant to institute new sports because of the money required for coaches, equipment, facilities, etc.” Though it has heavy support from across the state, it looks like water polo will have to wait for GHSA approval.