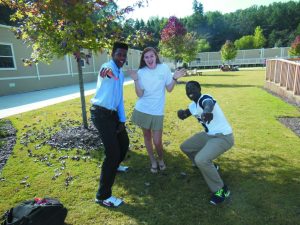 At the beginning of every school year, Pace’s Upper School opens its doors to an array of “new kids.” While most new kids are freshmen, this year Pace welcomed into its halls three new juniors. Cassady Greene, Elijah Holifield, and Chase Uter came to Pace for different reasons, but are all excited to be a part of this year’s junior class.

Cassady moved to Atlanta from Knoxville, Tenn. “I looked at the major private schools around here, but Pace stood out for some reason. All the people were just really nice,” said Cassady. Elijah moved from Connecticut, and came to Pace because his dad, Mr. Holifield, was hired as the new director of diversity. “My dad has been going to the same school as me for a while because he worked at my old school, too. It has its pros and cons, but it’s really nice when I can leave stuff in his office,” Elijah said. Chase used to go to Westlake High School and came to Pace to join his older brother, senior Kameron Uter. Chase kept it simple when he said, “I came to Pace for the education and the athletics. I’m glad to be here.”

Being new has its upsides and downsides. All three new juniors commented on how confusing the Pace schedule is. Elijah said, “I carried my schedule around with me for the first two weeks of school to make sure I didn’t get confused!” Chase said that his favorite part of school is his free periods and his literature class with Mr. Player. Cassady said, “I like my sculpture class a lot.”

All three new students are athletes. Elijah plays basketball, and is already doing preseason training in the morning with senior Armani Lashley and Coach Smith. Chase plays football and baseball like his brother Kameron. Cassady plays soccer and is running cross country for the first time this year. Pace’s new juniors participate in other activities beyond sports. Elijah said, “I actually started the bow tie club at my old school. I was scared to announce it during assembly, so my dad decided to do it for me.” He is also trying out for Troubadours because he enjoys chorus, and Chase joined the Pace Academy Board of Diversity and PASS.

Overall, Chase, Elijah, and Cassady have had a smooth transition to Pace. “I love how tight the community is. Obviously it’s a small school, but my old school was even smaller, and it didn’t feel as tight as Pace does,” said Elijah. “The hardest part has been just making friends and meeting people, but I really like Mr. Fleming and his class; they’re all super nice! They threw me a surprise party in class for my birthday,” said Cassady.