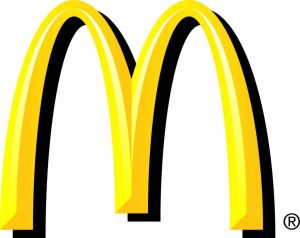 Mcdonald’s is one of the many restaurants avaliable at West Paces Ferry Road.
Photo: Huffington Post

After a long day of learning at the Academy, many Pace students like to celebrate with a snack from one of the various restaurants surrounding West Paces Ferry Rd. With so many choices, though, it is hard to decide which one to go to, or which restaurant has the healthiest options. Here are some facts about two popular dining destinations to help you make the right decisions:

One of the main food groups on the West Paces food pyramid is McDonald’s. This long-standing establishment offers a variety of options from double cheeseburgers to different salads and smoothies. For those who don’t know, a regular Big Mac meal with a Coke as a drink, adds up to 1090 calories. On a 2000 calorie per day diet, this is over half of your daily consumption already. Let’s say you want to go with a healthier option like a smoothie. This has 210 calories, which is almost the same amount as a small order of french fries. It also contains 44 grams of sugar, which is more than a Sprite of the same size. On the whole, it is very hard to eat healthy at McDonald’s.

While neither can be considered truly healthy options, Chick-fil-A appears to have healthier options on its menu. Both restaurants do offer salads and soups as alternatives to fried chicken and burgers, but when the dressing and additions such as bacon and chicken are included, the options are still not very good for you.