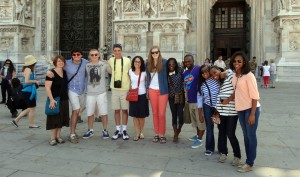 While many Pace students spent their summer break relaxing and sipping Fresca on the beach, a select group of Pace students were busy exploring Roman ruins, tramping through Spanish markets, learning the importance of personal finance in Cambridge, and bringing to life AP Euro in Russia. All of these wonderful trips and experiences were possible because of the hard work of Director of Global Education Ms. Anderson and all of the teachers involved with Pace Global Education.

After five successful years, the annual trip to England and Cambridge led by Mr. Hornor continues to be a staple in Pace’s Global Ed Program. This year, a group of eight rising seniors traveled across the Atlantic to take in the sites in London and participate in a week-long program at Cambridge University that focused on personal fiscal responsibility. Even as fatigue and jet lag set in after a nine hour flight, the group of Pace seniors hit the ground running. Upon arriving in London they saw Buckingham Palace, the Churchill Bunker, the London Eye, and much more. For senior Kal Golde, the personal finance classes at Cambridge were the highlight of the trip. “We learned tips on managing money that we can actually use later in life,” he said.

A group of eight Pace students got a taste of the high life when they traveled to Italy with chaperones Mr. Bloodworth, Ms. Goodrich, and Mrs. Kann. Because Italian is not offered through Pace’s foreign language program, the sole purpose of this trip was immersion in Italian culture, art and food. First arriving in Milan and later making their way to Rome and Florence, the group was on the move a lot during this trip. Exploring markets in Florence, seeing Michaelangelo’s David, and exploring the Vatican were only a few of the highlights. “Bartering in the markets and chilling in the Italian cafes definitely made the trip for me,” said senior Jake Pokalsky.

For the students who went on the Global Education trip to Spain led by Spanish teachers Ms. Riley and Ms. Bazzel, their goal was simple: improve their proficiency in Spanish and have a whole lot of fun doing it. In order to fully immerse themselves in the Spanish language and culture, the students stayed with a host family for the duration of the trip. Sophomore Natalie Novellas said, “It was cool to see how their culture differed from ours.” The whole group was in agreement that the ice cream (or “helado” in Spanish) was a defining part of the trip. Day trips to Cordoba and Sevilla provided the group with breathtaking views and many opportunities to shop in Spanish markets. “With a group of fourteen girls you can only imagine the amount of shopping that went on during a ten day trip in Spain!” said senior Jules Zappone.

The kings and castles of AP European History came to life for a group of seven students who accompanied Ms. Smith and Mr. Sergeant on the Global Ed trip to Russia. Splitting the time equally on the ten day trip between Moscow and St. Petersburg, the group focused on the historical impact and importance of famous sites such as the Kremlin, Red Square, and Catherine the Great’s breathtaking palace. Despite this specific focus on the history of Russia, the group strived to connect and further understand the current Russian culture that is paramount to today’s international relations. “It was really cool to be able to see and experience all of the places that we studied last year [in AP Euro],” said junior Patrick Moore.