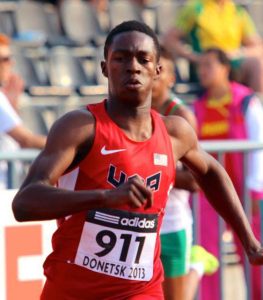 Many people would consider representing your country a once in a lifetime opportunity, but for senior Kenny Selmon it is only the beginning. Kenny, after placing second in the national 400 meter hurdles in June at the World Youth qualifying meet in Illinois, was given an opportunity to go to Ukraine this summer to compete with Team U.S.A. The journey was an extraordinary adventure for Kenny, and a third place finish on the international stage was an outstanding starting point for the star athlete’s international career.

In order to get to Ukraine, Kenny had to first do well at nationals. The way the team is picked for Ukraine is known as subjective choice, which means every athlete who finishes first gets an automatic bid. Athletes who Team U.S.A. thinks could score a lot get bids, too. For Kenny, nationals was the most stressful part of the entire experience. “I was more nervous about making the team than competing on the international stage. There were a lot of college coaches watching and all the folks back home really wanted me to succeed, which motivated me, but put lot of stress on me to win,” he said. Kenny finished second in the event and came within milliseconds of finishing first. However, he secured a spot to compete in Ukraine thanks to subjective choice, which thrilled Kenny and all his fans back in Atlanta.

Kenny attended a three-day training camp in Chicago with the USA Youth Team. He then traveled to Ukraine in July to pursue his dream of representing his country at the World Youth Championship. When he arrived at his hotel, he was put on a floor with all of his teammates, and he ended up bonding with many of them. “The best part of the entire experience was the friendships; we became really close and still keep in touch on group chat,” Kenny said.

When it finally came time for Kenny to compete, he was ready. Kenny put on his jersey with “USA” written on the front, and felt very proud: “Wearing USA was like no other experience that I have ever had. It was awesome representing your country.” He did not disappoint, leaping to a bronze finish in the 400 meter hurdle.

When he returned to Atlanta, he was showered with praise. The school is still buzzing with the excitement of Kenny’s accomplishments. “I know Kenny put in a lot of hard work and, thankfully, the hard work paid off,” said senior Jay Kumar. “He is such a beast; I am not even surprised he did what he did,” said senior Ally Jones.

Pace Academy coaches also had much to say about Kenny. “I am so proud of what he achieved this summer. He put in the work on the field and was able to accomplish his goals of getting better and making a name for himself,” said track and field coach Laura Agront-Hobbs. “It goes without saying that I am extremely proud of Kenny and all that he has achieved. I have been saying for a long time that Kenny is untapped. He has an amazing amount of potential. I am very excited for Kenny. It will be a lot of fun to watch him to continue to develop over his career,” said Director of Athletics Kris Palmerton.