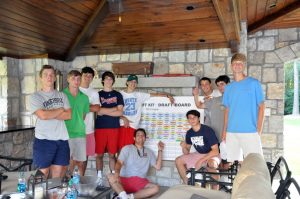 The senior participants of ‘The League’ fantasy football league had an offical offline draft before week 3 of this year’s preseason.
Photo: Josh Sloan

With the 2013-2014 fantasy football season kicking off, many Pace students are eagerly awaiting the start of the season. One can hear fantasy football banter throughout the halls of the Academy as many students prepare their draft strategies and prospective tips, while getting advice from online articles, reports, and from the expert Ms. Stevens. With students preparing months in advance for their fantasy drafts, fantasy football can definitely be called a big deal among the student body at Pace.

The beginning of the season means huge expectations and aspirations. “I expect nothing less than a championship at the end of my road to glory,” said junior Danny Kaplan. “I am going to win. That’s what’s going to happen,” said freshman Will Movsovitz. While there are a slew of fantasy footballers who expect victory, there are also plenty who are either expecting a rebound from disappointment last year or simply hoping to make an impact this year in their leagues. “I’m looking forward to the draft and I’m glad to be in the league. I’m going to work my way up. I do expect to win a little, but I’m taking it slow,” said junior Anna Brown. “I’m going to make a bunch of savvy in-season moves and change to the way the game is. Adapting well is key. I really want to do well his year and rebound from my last year’s performance,” said senior Harrison Halberg.

Some Pace students don’t look upon the upcoming fantasy season with as much enthusiasm as others. “The guys talk about it constantly and it gets annoying. I want to be in their league because it would be fun and enjoyable, but I’m bitter about it because the guys won’t include me,” said senior Evelyn Hobbs. “I want to play some fantasy football, but nobody ever invites me to play,” said senior Osei Avril.

Strategies are a big deal, and everyone has one. Although not many are willing to give away their insight, junior Hank Assaf offered some small advice for newer players this year. “Defenses aren’t important, so don’t overdo it by picking them early. Mobile quarterbacks are the future, and picking one of them could end up being a great call. Good luck to everyone playing this year, and if you’re in a league as big as mine (with 20 teams) you’re probably going to need some,” he said.