Denzel Franklin Commits to the Cardinal 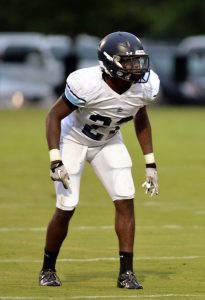 King’s Ridge running back Connor Henderson remembers the play well. Connor was given the start in the varsity football game against Pace Academy last September, and his coaches gave him the ball early and often. At first, everything was going according to plan for the Tiger offense, which drove the ball all the way down to the Pace three-yard line on its initial possession. On second and goal, Connor received the ball on a sweep play. As he rumbled towards the endzone, a Pace defender collided with him. “He seemed to come out of nowhere,” said Connor, whose body went one way while the football went another.

Plays like these are what have drawn some of the nation’s top football programs to Pace safety Denzel Franklin. Currently a senior, Denzel has already cemented his position as one of the top safeties in the country. After receiving scholarship offers from the likes of South Carolina, Mississippi State and Boston College, as well as strong interest from a handful of other major programs, Denzel committed to Stanford University on Aug. 1. Ultimately, it was an easy decision. “The biggest thing for me was having the best balance between education and athletics,” said Denzel. “I wasn’t going to choose one or the other.  It had to be both.” One would be hard-pressed to find a school that balances these two things better than Stanford. The school frequently finds itself atop academic standings, coming in at #6 in U.S. News & World Report’s 2013 National University Rankings, and even reaching #2 in the 2013 GRUP Academic Ranking of World Universities. Stanford’s football program has also achieved recent success; this year’s team entered the season ranked fourth in the country after a victory in the Rose Bowl last January.

Although many collegiate athletes must spend substantial time as a backup before cracking the starting rotation, Denzel may not have to wait long to see the field. “Because he fits exactly what [Stanford defensive coordinator] Derek Mason’s defense looks for, I expect Franklin to get on the field early and often, in both their base defense and their nickel packages,” said Brandon Huffman, a national recruiting analyst for Scout.com. “What helps make Franklin a good fit is that he’s got DB speed, but with linebacker aggression and the ability to run with backs if he matches up against them in the slot or in other aspects of the passing game.” The potential for early action shouldn’t come as a surprise to Denzel, who started as a freshman for Pace.

Impressive as it is, the road to this level of success has been a long one. Denzel has been an athlete since age six, but it wasn’t until after he moved to Atlanta from his native Boston seven years ago that he began playing football. The gridiron culture of the South, it seems, had an effect on him. “When I came down here, [football] was the thing to do,” said Denzel. Denzel plans to enroll at Stanford next August and immediately begin practicing with the team. In the meantime, however, his focus is on finishing his senior season on an unprecedented high note. “I think we have a big upside — huge upside — and I’m expecting a lot out of us,” said Denzel. “I think we’re a championship bound team.”