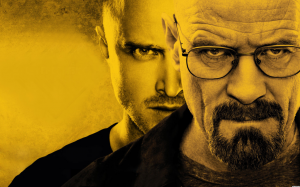 The show that has become an addiction for many Pace students is finally back. AMC’s “Breaking Bad” has been a hit series since the first episode aired in 2008, but it comes to a swift end this fall. The series has won multiple Emmy awards as well as a Golden Globe. “Breaking Bad” stars Bryan Cranston as Walter White, a struggling high school chemistry teacher who receives the news of his lung cancer in the first episode and decides to use his chemistry skills to manufacture methamphetamine. His job as a drug manufacturer pays for his expensive cancer treatments.

The airing of the final season is devastating for most avid watchers to contemplate, but it brings back the excitement they get from the show. The “Breaking Bad” story line could pull anyone in, whether a viewer’s interests involve chemistry or thrilling illegal escapades. “My favorite scenes are when Jesse and Walt cook the meth together,” said junior Matthew Seaman. Many Pace students enjoy the thrill of watching their favorite characters participate in a controversial activity.

Series characters range from a seemingly innocent chemistry teacher and his former student trying to hide their meth manufacturing scheme from Walt’s brother-in-law in the DEA, to notorious drug lords that Walt and his partner Jesse get tangled up with. “Hank is my least favorite character because he is trying to catch Heisenberg, or Walt,” said junior Anna Hoffman. Not all watchers have the same view of the characters, which makes for fiery conversation among loyal viewers.

Even though the series is quite popular among the Pace community, not all enjoy the dark side of the story line. “I started the series, but it was too intense and depressing,” said senior Olivia Levine. The show is a must-watch for people who are into darker shows, but if you cannot handle intensity, it is not recommended.

Although the final season is currently airing, it is not too late to enjoy the jaw wrenching series. As Coach Rouviere said, “I have not started the series, but it is on my next-to-watch list.” All of the previous seasons can be found on Netflix and can become easily addictive.