Web or Native? The Future of Computing

When you need to know something, are you more likely to search the Web for a useful website, or search for an app that provides the information you’re looking for? Would your answer change if you desired to play a game? These are the types of questions developers are asking themselves as they look to the future of mobile computing and desktop computing.

As developers look to create the next generation of software, they have to choose whether they want to create a platform that uses an Internet browser such as Google Chrome, Internet Explorer, Mozilla Firefox, or Safari, or one that is more like a traditional app. Companies typically call the Internet applications web apps or webware, whereas an app downloaded from the App Store or Google Play Store would be considered a native app. Although each type of computing presents distinct advantages and disadvantages, many favor the universal nature of web apps over native apps. 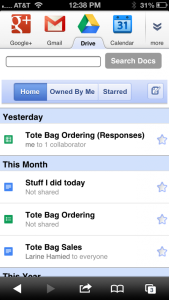 Google Drive allows you to store and edit documents from any browser, anywhere

Modern web apps are coded in a language called HTML5 – a new way of creating webpages that was made specifically to encourage the use of webpages on mobile phones. Adopters of this new coding language include Google Drive, Grooveshark, and many others. The amazing thing about web apps is that they work on any device regardless of screen size, and since they are dynamic in nature, they will adapt to whatever phone they’re on. They also do not require expensive developer licenses or approval from companies such as Apple or Google. However, most web apps are currently for work only, as most Web browsers on mobile devices don’t have the ability to play games like the typical desktop computer. In addition, Android and iOS don’t welcome web apps with open arms, as the annoying parts of the Web browser take up screen space and prevent the web app from being the main attraction.

Native apps are very easy to use as well, and are generally available in some type of a store or gallery, such as Apple’s App Store or Google’s Google Play Store. Almost all games for mobile devices are native apps, as they are built to work directly with the operating system, and can harness more power than web apps. However, native apps don’t work on all devices unless developers have coded a version for each operating system. Also, some apps aren’t approved by the store or gallery owners, so some great apps aren’t available for your phone.

With this information, what direction do you want computing to lean towards? Let us know in the comments section below! Or, if you want to learn more, check out some of these articles: