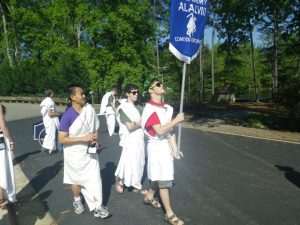 On Friday, April 19, the Pace Academy JCL traveled to the Rock Eagle 4-H Center to participate in one of the country’s largest Latin conventions, filled with togas, standards and just about everything else from ancient Greece and Rome. At the convention, students participated in many activities, such as Olympika (athletic competitions), Certamen (Latin quiz bowl), chariot races, Latin oratory and many other challenging academic tests about mythology, grammar, and culture.

Although Pace may be considered a smaller school when it comes to athletics, it is considered to be a large school at the convention, and competes alongside the two Latin “giants,” Northview High School and Walton High School. Pace brought home over 45 awards, including honors for three students who placed in the top 25 students overall, and a second place award in the multimedia competition for the video, “Ruling Roman Style.”

Senior Michelle Yancich, the “Consul” (president) of the club, attributed the growth of the Pace JCL in the past year to “all of the work Jaclyn Lund has done.” Juniors Jaclyn Lund and Michael Sloman, as well as sophomores Davis Miller and Jonathan Spalten, are poised to be the next leaders of the Pace JCL. Even though Jaclyn explained that the club “achieved all of its goals for this year,” she hopes to grow and expand the club to do even better in the future.