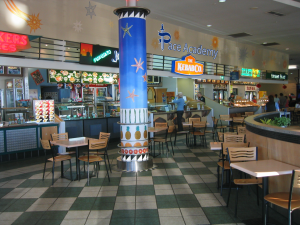 The Pace cafeteria will soon become a five-star food court!

At 2:00 this afternoon, Mr. Assaf is expected to announce the conversion of the Inman Center cafeteria to a food court concept for the coming school year. “The student body deserves to have a Big Mac whenever they choose,” he shared with The Knightly News, “Who am I to deprive them of that?”

According to Mr. Assaf, at the end of April, the Upper School student body (with the exception of seniors) will be allowed to vote on which restaurants they want in the new food court. Junior Mary Liles Fiveash declared, “My first choice is Taco Bell. I love the Doritos Locos Tacos!” Freshman Jack Walsh said, “I really want there to be a Doc Green’s at Pace; the student body should have healthier choices.” Dr. Brubaker is a strong supporter of having Shane’s Rib Shack in the cafeteria. “There’s nothing better than a delicious barbecue sandwich and a thirst quenching Dr. Pepper,” he said. The snack bar will also move to the food court, with yet another rise in prices.

Since the new Upper School is no longer being built, Pace has decided to reallocate some of the construction funds for the new food court. Once a week, there will be a seated dinner catered by Bones. Each student will be able to order one appetizer and one main course. By far the most exciting concept is the introduction of the executive table. The entire senior class will enter into a raffle, and twenty lucky students will be granted a seat at the grand table. Each person will have a personal chef who will cook anything he or she wants. ABBA will provide musical entertainment for every lunch.