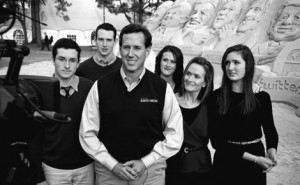 Although some readers, particularly those who have read my previous commentary, might find this difficult to believe, I have decided to endorse Santorum. There are a number of reasons why I have decided to make this switch, and I hope by the end of this article it will be clear why he is truly the best choice for America.

First and foremost, Santorum is known as the moral candidate. He has written and spoken about the importance of family and positive values. We all can admit that politics needs more of this. Gingrich himself is a prime example of a politician gone rogue, and we can all name several others engaged in political scandals over the past couple of years. Mark Sanford’s, um, “hike” along the Appalachian Trail. Blagojevich, of course, for trying to sell political power. There’s John Edwards and his affair with a campaign worker, Eliot Spitzer’s infamous scandal, Larry Craig’s foot-tapping fiasco, and others. Santorum, on the other hand, has maintained a happy marriage without having to resort to the despicable actions of those mentioned above. It would be a nice change for the White House to be led by example. It’s not just rhetoric, either. Santorum is staunchly against practices like abortion, subsidized birth control, or gay marriage. Yes, usually I would support the right to all those things, but in an era of decadence and loose morals, perhaps what America needs is four years of a shove in the moral direction, so we can re-learn how to cooperate and reform a chaotic political environment into one of respect rather than one of rebellion.

As far as the birth control issue, the Republican party has a point. I’m just as inflamed about the government subsidizing Viagra, or yoga classes prescribed for stress. The slippery slope argument matters, too. Paying for little things means paying for big things later on, and in an era of debt, we just can’t afford to cover everyone’s chemo, as tragic as that may be. Keep in mind that localized insurance agencies (rather than the status quo giants) would have a bigger chance in a free-market environment, which may help cover some of those costs for people who need it. Besides, government insurance just isn’t all that great, and it hurts doctors in a time where we need to be recruiting more of them, not pushing young people away from the industry.

Santorum is nothing if not consistent. When you think about Romney, it’s easy to pull hypocrisy out of a hat faster than bunnies. Obamacare and Romneycare. Abortion or no abortion. A Wall Street tycoon trying to help blue collar Americans. You’ll hear it here, and you’ll here it again: the turning point for 2012 is going to be the economy. For that, Santorum seems to have a bit of a leg up. Voters just aren’t going to trust a flip-flopper’s perspective, especially one who has made completely insensitive comments in regards to those of lower economic status. Santorum is slowly tearing down Obama’s economic defenses, using smart campaign tactics to make 8% unemployment feel like the tragedy it actually is. Especially when you compare the Santorum campaign to Romney’s; I explained in the last newspaper why Romney’s approach is failing. Santorum is also focusing on the places where Americans are being hit the hardest — things like jobs and gas prices. He’s said that the 2008 recession was a result of gas prices, and, since that’s something that most citizens feel sharply, that rhetoric has caught on just enough to make status quo rising prices enough to create a perception that we are still in or on the brink of economic crisis.

What’s more, Santorum can fix that crisis. Take a step back for a moment, and think about the government. It’s in ruins. Politicians aren’t cooperating, there are pointless blocks and vetoes, there’s more shouting about unimportant issues than there is working to fix real ones. Why do you want that kind of organization running your businesses? Yes, empirically, there are government rules and regulations that have helped industry. But the industry it helps the most is probably agriculture, which isn’t struggling in the first place. We give between $10 and $30 billion in subsidies alone every year. That’s $30 billion that could go back into the economy. Never mind clear mistakes like Solaron. It’s not like the Republicans are going to tear down all infrastructure, either. Even libertarians have a reasonable conception of the necessity of government for interstate highways and basic commerce laws. And let’s be honest, there are a lot of failing government programs that could use a re-haul if we can get it together.

There’s nothing wrong with simplicity. We tried stimulus and bailout economics under Obama, and clearly, that’s gotten us nowhere. So now it’s time for Plan B. (No birth control pun intended.) Cut taxes. Cut spending. Cut regulations. Cut back on pork spending, on programs that do nothing but allow politicians to get re-elected by saying “I gave money to you.”

Santorum’s ahead on energy policy, too. Obama’s veto of the Keystone XL pipeline was simply a mistake. Environmental protection matters, but only to an extent. We’re becoming increasingly dependent on oil, and that dependence was the root cause of two terrible wars, and possibly more to come (Pakistan, Iran, Syria, are all looming cauldrons of conflict bubbling away on the horizon.) XL would have provided jobs, drawing income to an otherwise fairly undeveloped area. (Can you even think of more than one fact about South Dakota?). More importantly, it provides the beginning of a path to oil dependence, and that’s a future that America actually has in store. For all the hype about needing international assistance, we have oil not only from Keystone, but there’s an abundance of untapped Arctic resources in Alaska, as well as offshore drilling. If we fund the industry, we can make the transition. It’s not the most environmentally friendly solution, but there’s no viable energy alternative, and we’re starting to feel the crunch of peak oil. Or at least, the peak of accessible oil. Although refinement of tar sands and other difficult extraction methods are more expensive in the short term, as the industries expand, the costs will go down, and it will ultimately save us a lot of money.

What’s ultimately part of American economic policy as well is education. I’ve written before about the American system taking education, and college, too seriously. Santorum has made comments about the value of hard work as opposed to hard learning, and the success stories he cites are true. You don’t necessarily need a top notch education to succeed. Even if your chances of getting work are worse by not attending college, Santorum isn’t ruling that out completely either, instead supporting community colleges, specialized job training, and apprenticeships — all of which we need more of. We need manufacturing. That fact is rarely disputed. The reality is that we’ve moved most of it overseas, and partially because there isn’t a market for work here. Blue collar workers are important to our economy; you simply can’t have a country of all elites. Someone has to support the bottom or the structure will collapse: think pyramid rather than upside-down-pyramid.

Even if you reject all of these principles, Santorum is still the better option. We don’t need another four years of roadblocks. If you like Obama’s platforms, voting for him isn’t a way of endorsing them. He’s clearly shown a lack of leadership in Congress, and that’s where the real action gets done. We need someone strong, someone respectable, someone who can get legislation passed and something done.

And for that, Santorum is your man.