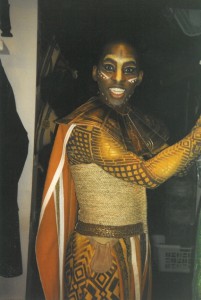 Mr. Mcadoo smiles before going on stage in the broadway production of the Lion King. Photo Credit: Mr. McAdoo

The spring show is a Pace tradition rivaled only by staples like the Great American Picnic or Cabaret. Extensive planning goes into choosing, rehearsing, and performing these shows. For instance, the show selection is ceremoniously announced well in advance at the year-end performing arts banquet. “Xanadu,” a musical comedy about Greek gods participating in roller disco, was hand-picked by Dr. Mengert for this year’s spring show. Despite tradition, “Xanadu” was sacrilegiously and surprisingly canceled last Friday. This came as a serious shock to the theatre program. “They had already come out with the cast list. We had been practicing for weeks,” said senior Colin Barham, “then suddenly it was canceled. It was so unexpected.” The show was scrapped after the cast was late to rehearsal two days in a row. Dr. Mengert threatened to cancel the show when they were late the first time, but he was not taken seriously. “Doc has made threats like this many times in the past,” said junior Ben Hirsch, “we thought nothing of it at the time.” The next day when students showed up late again, they realized how serious Dr. Mengert was. Senior Kitty Cook said, “There was a sign on the door saying that the show was off, with no explanation. Later that night we got an email from Doc saying the show was canceled until further notice.” Over the weekend, Mengert emailed Upper School News & Announcements about auditions for another Broadway musical, “The Lion King,” and a week later a cast list was posted.

Surprisingly, Mr. McAdoo was cast as Mufasa, one of the most prestigious roles. This isn’t the first time a teacher has been in a Pace production. Dr. DuPree has played a part in several shows including “The Sound of Music” and “The 25th Annual Putnam County Spelling Bee.” It is, however, the first time a teacher has been given a lead role. Dr. Mengert commented, “I asked Philip to audition and he was phenomenal. He is a great actor and he knows the show. He was the obvious choice.” Mr. McAdoo performed in “The Lion King” live on Broadway before working at Pace. “I’m really excited to be part of the show again,” said Mr. McAdoo, “Hopefully I can use my experience to bring this show to a new level of excellence.” Also cast in “The Lion King” are seniors Connor Perkey, Hannah Hoff, and Matt O’Brien as Simba, Nalla, and Scar, respectively. Joining them on stage, junior Robert Brooks will play Timone, and freshman Caillin Cooke will play Pumba. Dr. DuPree, who will make a special appearance in the show as the crazy baboon, said, “I hate being typecast, but I think this will be my breakout role.” The rest of the cast is made up of almost entirely freshmen. Freshman Katherine Merritt explained, “Our grade had so much fun dancing together during Spirit Week, we all signed up to work together in the show’s choreography.” Considering how well the freshmen danced during Spirit Week, the show promises to be shagtastic, baby, yeah!

Interestingly, none of the past members of “Xanadu” were cast in “The Lion King.” This came as an unexpected slap in the face to many theater veterans. “I sung my heart out at the audition,” sobbed senior Patrick Corbett, who was cast as Zeus in “Xanadu,” “but I wasn’t even considered for callbacks.” As he wiped tears from his eyes, he added, “Don’t put this in.” Junior Megan McCurry, originally cast as Kira, was also outraged that she didn’t get a part in the new show. “It was rigged and totally unfair. Now that the theatre program has lost all its integrity, I’m dedicating my existence to the Pace girls golf team.” Similarly, senior Lauren Gold has sworn off theater for life and vows to pursue Tai chi. “I think training in the art of Tai chi will help me express my rage over this whole debacle, plus the belts are stylish.” Other ex-cast members are less willing to get over their anger. Many are planning to boo and throw tomatoes at the cast of “The Lion King” on opening night. While this great upset in the theatre realm promises to be talked about for years to come, you can thankfully experience the showdown yourself April 26-28.