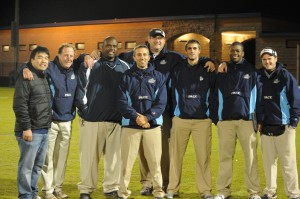 Pace’s football program has a fresh face behind the clipboard, as current head coach Matt Hall will move on to coach football at Galloway as they start their new program. The head coaching vacancy will be filled by current strength and conditioning coach Clement Rouviere, who is finally ready for the responsibilities of a head coaching role after three years in his present position. However, many players are confused as to why Coach Johnson would not be the new leader on the gridiron.  When asked, Coach Johnson said, “I’m kinda surprised I was not given the job; they even took away my Offensive Coordinating job and moved me to be Kicking Coach, and I’ve never kicked in my life.” Coach Rouviere said with his trademark French accent, “I am very surprised by the news and frankly I’m not so sure what to do on defense or offense, but I’ll give it a shot.”

Coach Hall built a good program here, and the new head coach looks to continue the recent success of the team. Junior and tight end Reade Williams said, “I am looking forward to the coaching change. I have met with coach and he said he wanted me to move to center.” Coach Rouviere also said, “We are going to change it up a little bit. I am going to put [sophomore] Denzel [Washington] on the offensive line and let [junior] John McCrea be the lead running back next season.” Although his changes may seem puzzling to fans, the Pace Academy community has rallied behind him. The man behind the shakeup, Athletic Director Kris Palmerton, said, “Coach Rouviere provides us with the best opportunity to win in the upcoming future. The only problem the team will have is understanding his accent.” It will be interesting to see how the new head coach can fill the legacy of Coach Hall; it will be equally as interesting to see if Coach Hall can get the Galloway program up and running smoothly.