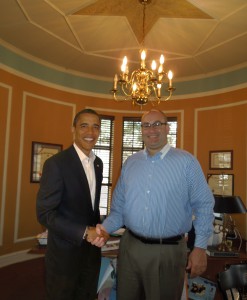 Get ready everybody! President Barack Obama is stopping at Pace Academy on his 2012 Election Campaign. He is slated to speak at a morning assembly on Friday, April 6. Several months ago, Mr. Assaf attended a convention sponsored by the National Association of Independent Schools. While there, he got a chance to meet President Obama in person. Mr. Obama is dedicated to ensuring that the children of America are provided with a solid education that allows them to compete in a global environment. He said at the convention, “A world-class education is the single most important factor in determining, not just whether our kids can compete for the best jobs, but whether America can out-compete countries around the world. America’s business leaders understand that when it comes to education, we need to up our game. That’s why we’re working together to put an outstanding education within reach for every child”. Mr. Assaf was moved by his outlook on schools and asked him if he would come speak to the students of Pace Academy. The headmaster said that he recently got a call from the White House confirming that President Obama would make time in his busy schedule to visit Pace.

Mr. Assaf could not be more excited. He exclaimed, “It is such an honor to have the President of the United States coming to speak at a small Atlanta private school such as Pace.” He added, “No matter what your politics are, it is a supreme privilege to have the leader of the free world come here.” Mr. Gannon is ecstatic about the upcoming event. He is “hope [ing] that students will appreciate this opportunity. As an APUSH teacher, I see this as history in the making for Pace Academy.”

The students of the Academy are very excited as well. Freshman Kamran Sadiq cannot believe that he is going to see the president speak and wants to get his autograph. Sophomore Tess Dillon is also astounded by this approaching event. She said that she is “amazed that he is coming to such a small school to speak.” Junior Haley Lowrey, although she is an ardent Republican, thinks that “it is cool that he is coming to speak and [she is] really looking forward to the assembly.” Teachers are equally, if not more, enthusiastic about this event. For Mr. Hornor, being the U.S. history fanatic that he is, meeting the President is an unreal dream of his. When asked about the assembly, he said that he did not have words to describe how he felt. He is “mindblown and [is] really looking forward to April 6.” He asserted how “this will be a life changing experience. It really is a huge honor to have such a powerful leader at our school.”