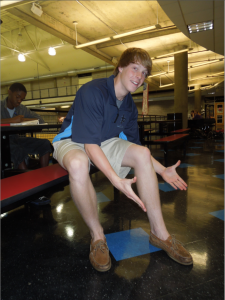 Pace faculty recently discussed the possibility of introducing a new set of dress code rules for the 2012-2013 school year. There was talk of requiring dresses and skirts to be knee length and perhaps getting rid of jeans. The teachers also discussed changing the unflattering dress uniform skirt from khaki to plaid, combined with making shoes part of the dress uniform by mandating that all girls wear Mary Janes and all boys wear black leather shoes. While nothing has been decided regarding a permanent uniform, there are a few changes being made to the regular dress code, the most controversial of which is the banning of Sperrys, Pace students’ favorite article of clothing by far. “Everyone wears Sperrys!” exclaimed junior Taylor Schofield. “Now what am I supposed to wear? I have no other shoes,” said sophomore Wylie Heiner. The faculty defended their decision to ban the shoes, with Ms. Smith saying, “those shoes are always untied and look sloppy. I personally think that all the young men at the Academy should be wearing patent leather shoes every day.”

Most students are very unhappy with this new rule for dress code, and the office received calls from several parents complaining. However, some students agreed with the ban: “I don’t see this as a big deal,” said junior Evan Young. “Now this means I can wear my Toms.” Other students believe that the Sperrys ban is going too far. “This is ridiculous; the staff can’t forbid something that’s so popular,” said junior Sam Schaffer. Mr. Day spoke out against this backlash, explaining that “the problem is that everyone wears Sperrys; if we wanted everyone to be the same and not be individuals we would just have dress uniform every day.” Sneakers have not been banned, much to the relief of most boys at Pace. In light of all the complaints, the faculty may allow Sperrys on Fridays to appease the students. In the meantime, students will continue to fight for their right to wear their favorite shoes next year.
By Natalie Camrud, Staff Writer ’13