Will Frampton, Class of ’99, Returns to the Academy 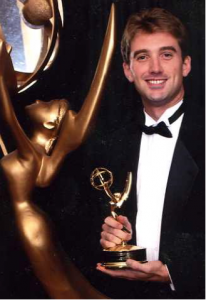 Will with his Emmy award. Photo: Will Frampton

How will Pace Academy affect your future? Students see Pace as a next step on the way to college, but for Pace alumnus Will Frampton of the Class of 1999, Pace was much more. Currently an on screen reporter for CBS Atlanta, he claims to owe it all to Pace. His humble beginnings on The Knightly News staff gave him the spark he needed. Will was on newspaper staff all four years of high school and was the main sports writer most of that time. Tom Stinson, who was a Pace parent and an Atlanta Braves beat writer for The Atlanta Journal-Constitution, also had a big impact on Will. He explained, “He gave me a talk that really energized me…I can all trace it all back to that night my junior year.”

After graduating from Pace, Will attended Erskine College in Due West, S.C. and interned at CNN. It was there he learned his passion for presenting and story telling, editing video, and on screen reporting. Will explains, “I did not major in journalism — rather, in English. My internships at CNN and WYFF-TV in Greenville, S.C. made all the difference in helping me prepare for my career.”

After his college days were over, Will headed out to Terre Haute, Ind., the 155th largest media market out of 210. Will said that he struggled with some tough professional learning experiences during his year and three months in Terre Haute. Then, the opportunity came to take a job in Columbia, S.C. — much closer to home, and a great opportunity to advance his career in the 79th largest media market. During that time, Will traveled to Kabul, Afghanistan in December 2007. He spent two weeks embedded with the South Carolina National Guard shooting his own video and sending back stories via satellite. He won an Emmy Award for his 48-minute documentary on Afghanistan when he returned home. Next, he moved to Sacramento, Calif., the 20th largest media market and the place he met his future wife. He said, “In Terre Haute, Columbia, and Sacramento, I was shooting and editing my own video, then reporting it live on TV, with occasional chances to cover big sports stories.”

Throughout those five years, he always wanted to get back to Atlanta. However, getting a job in Atlanta media is extremely difficult. There’s not much turnover and it is a destination media market. Will defied the odds and was offered a position at CBS Atlanta six months ago. After moving back to his hometown, he decided to get involved at Pace as a volunteer. Will is now helping out the current Knightly News staff with story ideas, editing, and video production. He said, “The farther away you get from it, the more you’ll appreciate it…I really wanted to reconnect with the place that it all started.”