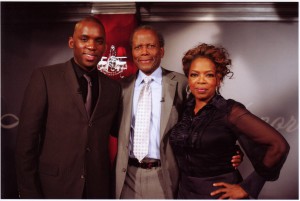 It's Mr. McAdoo and Oprah!

Mr. Philip McAdoo has a vast wealth of experience with diversity, both on a personal level (being black and gay) and stemming from his professional career on Broadway. His goal as Pace’s Director of Diversity, in particular, is to help students “see peoples’ differences as powerful, positive assets instead of negative flaws.” Beginning in college, Mr. McAdoo endured subtle forms of discrimination, hindering his ability to jumpstart his acting career. Nevertheless, a firm grounding in sports, strong friendships, and ultimately serendipity led him to the influential job he currently holds, not to mention providing for plenty of fun along the way.

Growing up in Haw River, a small town outside of Chapel Hill, N.C., Mr. McAdoo played, or was involved in, varsity basketball, baseball, cross country, chorus, and drama in high school. Born in the UNC-Chapel Hill hospital, he declined a scholarship offer to play Division I college basketball at Davidson in order to faithfully attend The University of North Carolina at Chapel Hill. There, Mr. McAdoo made the JV basketball team, which played against small colleges, yet decided to give it up after one semester, opting instead to pursue theater and choir. However, because traditional theater programs like UNC’s wouldn’t cast an African-American for the mostly white lead roles they had, Mr. McAdoo was forced to join a performance theater company in order to play bigger parts. His proudest achievement with this group was a rap show of the Odyssey.

By his senior year, however, Mr. McAdoo was ready for a full-time theater experience, and he left UNC (although he later returned to earn his B.A. degree). He auditioned for a theater company in Elmira, N.Y. (upstate), but to his dismay was cast as a slave. As Mr. McAdoo had hoped to provide more as an actor, he quit, taking another offer to work for two daily productions at  Busch Gardens in Florida. He drove all the way from New York (against his parents’ will), arriving with $50 and no place to stay. While working in Florida, Mr. McAdoo also acted at Universal Studios in the “Beetle Juice Rock ‘n’ Roll Review” with Joey Fatone, a former member of NSYNC. Between these two jobs, Mr. McAdoo found a suitable home sleeping on a fellow actor’s couch. But he was still living in a rough neighborhood and, although he eventually got his own apartment, Mr. McAdoo decided that there were better opportunities elsewhere. He left the country, traveling to Tokyo, Japan to work at Disney Land. After two years, though, Mr. McAdoo moved back to New York, convinced by his friends Taye Diggs and Diggs’ wife Idina Menzel (now on “Glee”) that success could be found on Broadway, where they were acting with the original “RENT” and “Wicked” shows. (Menzel was the original Elphaba in “Wicked.”)

In New York, Mr. McAdoo got a job waiting tables for a dinner boat company that sailed around Manhattan. While doing this, he spent lots of down time auditioning for shows. His big break finally came in the most unexpected of places: on the dinner boat. As he was serving a table, he began talking with one of the customers, who told him that “The Lion King” was “looking for black people to hire.” Although Mr. McAdoo now snidely remarks that he “guess[es] this made sense, as the movie is set in Africa,” he auditioned for the show, successfully making the cut as one of 16 out of 700 people auditioning. He now explains that this show is what first opened him up to the thought of diversity, as he “was working with South Africans, Kenyans, and tons of other cultures all on the same stage.”

As most people know, Mr. McAdoo has met tons of celebrities, and he said that most of those opportunities arose out of his experience with “The Lion King.” Most notably, “The Lion King’s” ensemble was asked to sing for Sting’s fundraiser at Carnegie Hall, where they got to meet Michael Jackson, Janet Jackson, Jerry Seinfeld, Elton John, Wynonna Judd, and Diana Ross, among others. Towards the end of his stint with “The Lion King,” Mr. McAdoo said that he, as the understudy of Mufasa, actually got to take over the major role.

Mr. McAdoo also acted in a second Broadway show, “RENT,” as three different characters (Benny, Tom Collins, and Mr. Jefferson). This was a major challenge, and opportunity for extra pay, as each night the director picked which role he would be playing.

In 2008, Mr. McAdoo decided to leave Broadway for good because his partner, whom he met in New York, had just taken a job with the CDC in Atlanta. The two moved here together and Mr. McAdoo soon interviewed and got the job at Pace. Not long after his arrival, a casting director for Trey Parker, one of the creators of South Park, tried to get Mr. McAdoo to work on a project called “The Book of Mormon,” which Mr. McAdoo regrettably declined. “The Book of Mormon” has been wildly popular on Broadway, winning nine Tony awards in 2011, including Best Musical.

So what ultimately brought this big time actor permanently to education, and not to the Alliance Theater or somewhere else? (Mr. McAdoo actually worked as cast member Peter in the Alliance Theatre production of “Jesus Christ Superstar” in Atlanta.) Mr. McAdoo attributes his transition from acting partly to the September 11th terrorist attacks, which he witnessed firsthand before moving to Atlanta, and to his experience with several high school teaching jobs he held in New York: “I realized that there had to be a way to make a bigger impact; it was impossible to go from the smell of burning flesh one hour to singing “Hakuna Matata” (no worries) on stage the next.”