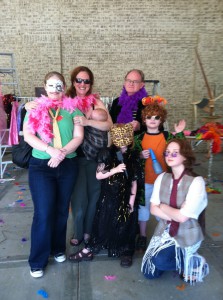 “The Fall Fair is a Buckhead Version of an English Fete Which Combines Elements of the Bizarre and the Garden Party” — Dr. DuPree

Most Pace students have a slew of unanswered questions for the infamous Dr. Don Keck DuPree. However, conventional answers are hard to come by with this man. Just before sitting down for the interview, Dr. DuPree made sure to point out that “this article will be highly humorous and nonfactual.” With that said, he was ready to begin.

Dr. DuPree consistently reads the Poem of the Day on FirstClass at 2 a.m. every morning, and when asked about it he explained that his students should know by now that he does have “a little bit of vampire blood.” He admitted that he doesn’t sleep a lot, despite doctors’ warnings. In fact, his parents actually created a padded room for him at an early age so that he could play throughout the night and not disturb the rest of the family.

Readers are likely not surprised that Dr. DuPree was involved in some high school pranks. Most students know that he stole a police car, but it is largely unknown that during his junior year of high school he walked a cow (from his grandfather’s farm) up the stairs of the school and left it in his teacher’s classroom. He shared, “The funny thing about cows is that they will easily go up stairs but they don’t as easily go down stairs.” Dr. DuPree said that last year’s parking lot fiasco failed as a senior prank, suggesting that this year’s seniors might try something more imaginative: “They could fix a broomstick on the flagpole rope, take the flag down, attach a garbage can over the broomstick and raise it with an image on the can, preferably something creative.”

When asked about his lazy eye and comparisons to Mad-Eye Moody from Harry Potter, Dr. DuPree smirked and explained that before he had any surgery, he could move his eyes independently. His third grade teacher, Ms. Hagar, wrote a letter home rebuking Dr. DuPree for his disrespect because he had one eye on the teacher and the other out the window. Instead of receiving a customary beating, his father nearly died of laughter.

Although many students are aware that Dr. DuPree married one of his students, most don’t know the full story. At Sewanee University, Justine, a student of Dr. DuPree, convinced her roommate, his future wife, to go out of her way to meet her “cool teacher.” According to Dr. DuPree, his wife “saw the kid in me who could lead the cow up the stairs, but also the academic who could fascinate her with Marlowe’s Edward II. It was while I was teaching that play that she admitted we were dating.” He continued, “She immediately had to withdraw from the class, so I went to the Associate Dean of the college for an add/removal slip; he had absolutely no qualms because he had married a student himself. She withdrew and we were engaged the summer after she graduated.”

Lastly, when asked about his parents, Dr. DuPree promised that “there are thousands of funny stories,” but that he would only recount one. To set the scene, he explained that his mother was “not a home maker,” and his father flew light aircraft. When the house was “in a state of mayhem,” his mother would call the control tower with the news: “Red, your wife is cooking liver.” This was code for “Stay near the airport and eat out. Don’t come home!” Dr. DuPree confessed that if his mother ever actually cooked liver, “it would be like a Frisbee you could have hurled through the air.”