I Bet You Didn’t Know… 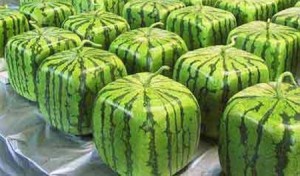 These watermelons are such squares! Photo: http://www.snopes.com/photos/odd/watermelon.asp

1. Mark Twain never graduated. He dropped out of school when he was 12.
2. The smallest living horse is only slightly under 1.5 feet tall (17.5 in.).
3. You consume one tenth of a calorie every time you lick a stamp.
4. Watermelons are sometimes squares in Japan because they stack better.
5. Chewing gum while peeling onions will keep you from crying.
6. In England during the 1880s, “pants” was considered a dirty word.
7. Hawaii is moving towards Japan at approximately 3.5 inches each year.
8. Starfish do not have brains.
9. The dot that appears over the letter “i” or “j” is called a tittle.
10. Cranberry Jell-O is the only flavor that contains real fruit flavoring.
11. Abraham Lincoln’s dog, Fido, was also assassinated.
12. There was a town named “6” in West Virginia, the shortest town name ever, until it was changed to “Six.”
13 A “photic sneeze” is a uncontrollable sneeze that occurs after looking at a bright light.
14. There are more beetles than any other kind of creature in the world.
15. The Spanish word “esposa” means “wife.” The plural, “esposas,” means “wives,” but also “handcuffs.”